Book promo services: do they work?

Posted by Paul Samael on Monday, July 12, 2021 Under: Self-publishing

Book promo services are outfits which offer to promote your self-published book to readers, mostly via mailing lists. Do they work?  In brief - yes, some of them are pretty effective (in my view) but the downsides are: (i) you will have to part with a modest amount of cash; and (ii) you can waste a lot of time (and money) on sites which are not much good (although the good news is you can easily avoid that by just focussing on more effective ones - see below).
What’s the cost?  Well, I have managed to get just over 2000 downloads since mid-May 2021 from using 4 different promo services at a total cost (to me) of $153.  I don’t think this is bad value, given that previously, my novel was hardly being downloaded at all from Amazon (although if you are on a tighter budget than that, there are still options - see below).  To put this in perspective, it took me well over 18 months to get a comparable number of downloads on Smashwords (although that was without paying anything at all).
As you might expect, downloads tail off pretty fast - but so far, they have not returned to flatlining at zero for weeks on end.  This suggests there is a longer-lasting effect in terms of your book’s visibility on Amazon (possibly based on sales rank - see below), leading to small numbers of additional downloads for a period after your promo days (e.g. 1-2 every few days or so).  So far, that effect has lasted about a month and a half.  I suspect that it too may well tail off and will update once I have a better idea of how long it seems to last (I dare say that by writing this, I've just jinxed it and it's about to run out on me).  But it’s worth noting because although this level of downloads may not sound spectacular, it is comparable with (if not better than) the number of downloads I currently get via Smashwords, which has previously been the best performing platform for me.  Update Nov 2021:  the "after-effect" of the various promos had pretty much tailed off by the beginning of October (and I have had no downloads at all for over a month - it's now mid-November). But overall, it's lasted about 4-5 months, which I don't think is too bad.
Anyway, those are the headlines - here’s some more detail on my experience so far:
Background
I published my novel in 2012 on Smashwords where it has had over 9000 downloads to date, without me having to do very much at all in the way of promotion (mainly because it was free and I was lucky enough to get some decent reviews).  That 9000 figure is largely based on small but reasonably regular and consistent numbers of downloads accumulated gradually over time.  But over the last couple of years, downloads via Smashwords have definitely slowed down for me.  So in order to tap into into a larger audience, I put the novel up on Amazon.  The trouble is, it’s such a huge site that it’s hard to get visibility and my efforts to promote it (using free promotion sites) were pretty ineffective.
Earlier this year, I persuaded Amazon to make it free by asking them to price match it to Smashwords, Apple and various other sites where it has always been free - but I was still getting virtually no downloads.  I then submitted it to a range of free or very low cost promo sites (no more than $10-15) but these never got me any more than a handful of downloads, if that - and the effect was very short-lived.  I was using these lists:  Kindlepreneur, This is writing and Readers In the Know.  My advice - don’t waste your time with these.
A different approach
Anyway, after Googling around for a more effective approach, I came across this advice from Nicholas Erik.  I think my experience bears out what he says, which is to focus your efforts on a handful of better performing, paid-for book promo sites.  The ones I tried are largely from his list of recommended promo services and a couple of others: Paid Author and Reedsy.  Here are the “headline” results:
The BookDoggy promo alone was sufficient to get the book into the top 50 of free ebooks in “literary fiction” and “science fiction: metaphysical & visionary”.  Subsequent promos resulted in further boosts, pushing it into the top 10 in the latter category.
On the basis of the above stats, you might say that Freebooksy or Fussy Librarian look the most effective, and that is probably a reasonable conclusion - but a “like for like” comparison is hard to make because (as advised by Mr Erik), I grouped my promos reasonably close together with a view to maximising the impact on the book’s Amazon sales rank.  So it’s arguable that number of downloads on the days when I ran my Freebooksy and Fussy Librarian promos was inflated somewhat by the after-effects of the BookDoggy and BookRunes promos (which may well have increased the novel’s visibility by pushing it up Amazon’s sales charts).  BookRunes appeared to have more impact on sales rank in the UK, rather than the US.  Given that it followed the BookDoggy promo, I think it’s fair to say that if you’re having to choose between these two cheaper options, BookDoggy is clearly better value (based on my experience, at least).

Update September 2021:  I recently used a new relatively low cost ($25) book promo service called Hello Books, but only got 15 downloads (and that is probably a generous estimate). This was poor value compared with BookDoggy and BookRunes, which are broadly in the same price bracket. It's possible the service may improve over time, but for now, it's probably one you shouldn't bother with.
Several of these promo services also allow you to link to sites other than Amazon where the book is available.  This resulted in me getting a bit of a boost in downloads of the book from Apple iBooks, although nowhere near the levels of Amazon downloads (about 70-80 copies in total).

I chose the sci-fi list for Fussy Librarian because it was cheaper than their litfic list - whereas with Freebooksy it was the other way around (sci-fi was more expensive).   Happily, that means that if I want to have another promotional push at some point in the future, I can probably sign up for a promo using Fussy Librarian's litfic mailing list and Freebooksy's sci-fi mailing list.
Minimum review requirements
None of the above promo services require you to have a minimum number of reviews - although some sites do.  Both Book Cave and E-books Habit also require those reviews to be on Amazon (my argument that I met their criteria based on reviews from other sources cut no ice with them).  So by all means submit to these if you have enough Amazon reviews, otherwise don’t bother.  Note:  some websites with discussions of promo sites suggest that Fussy Librarian requires a minimum number of reviews, but as at the time of writing, that was no longer the case.
Longer term impact on downloads/visibility
As you’d expect, you get a great big spike in downloads on the day of promotion, then it tails off pretty rapidly: 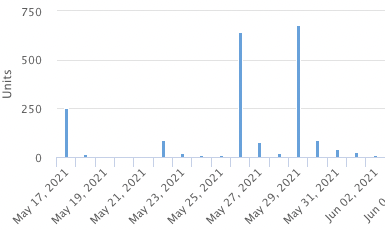 But as a I mentioned, there seems to be a bit of an after-effect.  My guess is that this has to to do with the book appearing in Amazon’s sales charts for certain genre categories, which increases its visibility on the site.  The impact seemed to be more marked whilst the book was in the top 50 of its genre categories in both the UK and the US (the significance of that being that it appears on the first page of the chart).  However, despite dropping out of the top 50, it continued to get a small number of downloads - and it doesn’t seem to take very many downloads to stay in the rankings (or to move back up again if you’ve slipped down).   Anyway, this is the book’s performance over the past couple of weeks, when it's been outside the top 50 - it's still getting 1-2 downloads every few days or so:

Conclusion
Overall, I’m fairly happy with the results, given that my main aim was to get the book into the hands of more readers.   I got over 2000 downloads and so far two 4 star rankings out of it, plus a single 1 star ranking (obviously someone really didn’t like it - oh well, you can't please everyone).  I've always accepted that when you're giving a book away for free, then downloads almost certainly don't equate to actual readers - but even if you assume that up to 50% will never read it (which is a hefty discount), that still leaves 1000 who might. I also wanted to see if it was possible to get the book into the hands of a decent number of readers without relying on Smashwords (where as I've mentioned, my downloads seem to be on a downwards trend - not that I'm complaining, as it's been very good for me in the past).

You may be wondering why I haven't said anything about BookBub, which appears to be the Big Daddy of book promo services, vastly outperforming the others (and comes highly recommended by Mr Erik) - but by all accounts, it's pretty difficult to get selected and I wanted to see if it was possible to get a decent number of downloads (and some visibility on Amazon) without using BookBub.  I think it's pretty clear that the answer is yes you can, provided you are prepared to spend a modest amount on promos.

Obviously if you’re looking to make money then all this may be less encouraging, as you’re having to give the book away for free and pay out to promote it - whereas I've never been bothered about earning money from it.  I suppose you could say that I ought to feel the same way - after all, I am effectively having to pay to find readers for my book, with no prospect of ever recovering that investment (in monetary terms, at least).  But the way I look at it is that I spent a lot of time and effort writing it and putting it up on Amazon (and elsewhere) - and for it not then to be downloaded by anyone is pretty discouraging. If it just sits there, not being downloaded at all (which is what was happening before I ran the promos), that's hardly any better than having the manuscript languishing in your desk drawer unread by anyone - and rather defeats the point of self-publishing.  It doesn't surprise me that it is hard to get visibility on a site which is the size of Amazon - and so I'm not going to grumble about having to invest a modest amount of money in ensuring that the book gets into the hands of a reasonable number of readers.