Posted by Paul Samael on Wednesday, March 13, 2013 Under: Book reviews 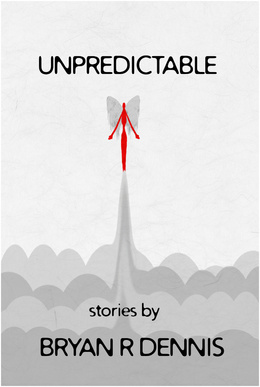 “Unpredictable” is a collection of 3 short stories by Bryan R Dennis available as an ebook free of charge on feedbooks.com. UPDATE 5.2019 - well, not any more, as Feedbooks has closed down its self-publishing platform - but happily, as at the time of updating, you could still get your hands on a copy from the good folks at getfreeebooks.

Oh no, I hear you sigh, not another collection of short stories (e.g. see here and here for previous reviews of short story collections).  But let me try to make the case for short stories in general – and then why you should try these ones in particular.  First, short stories are a good way of trying out a writer to see if you might like their longer work (in this case I was sufficiently impressed to fork out real money for Bryan R Dennis’ novel - see below for my thoughts on that).  Second, I don’t think the general emphasis on novel-length fiction is particularly healthy – because it can lead to writers (i) dragging out a story/idea for longer than is really necessary; (ii) not exploring other ideas which might be just as interesting (if only they didn’t feel compelled to spend quite so much time/effort on turning just one of their many ideas into a 100,000 word magnum opus); or (iii) in my own case, just getting a bit fixated on a particular length.  I’d far rather read a good short story than waste my time skipping pages of filler in a novel which should really have been a novella (or something even shorter).   And in the time it takes me to read one novel, I can read several short stories which – taken together – may give me considerably more food for thought.

One of the authors whose work exemplifies the potential of the short story as a vehicle for trying out lots of different ideas/approaches is Philip K Dick, whose collected short stories run to 5 volumes. They are quite variable in quality (the same can also be said for his novels) – but it’s interesting that movie-makers have taken the short stories as a starting point at least as often as the novels.  I suspect that part of the attraction for movie script-writers is the fact that, compared with a novel, they appear relatively undeveloped;  perhaps they feel that gives them more freedom to develop the central idea in the direction they want to take it.  I suspect it’s also one of the things that frustrates some people about short stories – that the story sometimes feels as if it ends before it’s supposed to and you’re left wondering how things will turn out for the characters.  But personally, I rather like that aspect of short stories – I like imagining what might have happened if the whole thing had been explored at greater length, rather than always having it laboriously plotted out for me across a 60,000-100,000 word treatment.

Anyway, apart from the fact that it contains short stories, why should you read “Unpredictable”?  Well, if I had to pick just one reason, it would be the last story, “Illinois Corn”, about a sort of agricultural fight-club – it is compelling, unsettling and extremely effective.  I was initially less sure about the first story, “Unpredictable”, because the narrator seemed so infuriatingly perverse - but by the end he’d succeeded in gaining my sympathy (to an extent, at any rate).   Finally, “Jake’s Mom” is a well-observed story about a mother’s relationship with her teenage son.  In all 3 cases, I found myself speculating about what would happen to the characters over the longer term or imagining other details about their lives – which I always think is a good sign (see above).

On the strength of these 3 short stories and the free sample included at the end of “Unpredictable”, I forked out for Bryan R Dennis’ novel, “An Epitaph for a Coyote.”  At the time of this review, it was available for £1.95 on Amazon.co.uk, where it has garnered an impressive collection of 5 star reviews. I’m not sure I can add all that much to the (generally very positive) range of opinion expressed on Amazon.

Where I  came out was somewhere around the 4 star mark – there were parts of the novel about which I shared the enthusiasm of the many 5 star reviewers but others where I had some sympathy with some of the more critical reviews (which, I hasten to add, are in the minority).  It reminded me most of some of Douglas Coupland’s work.  For instance, it explores some similar territory - office cubicle hell, the vacuousness of modern life etc (it is, after all, set in and around Las Vegas) - and contains a fair amount of Coupland-like quirky observation (maybe a bit much at times).

But it is not without emotional depth – there is a nice twist, part way through, when we finally discover exactly why our hero, Henry Pluck, seems to like hanging out with older people quite so much (which is initially quite puzzling).  As one of the Amazon reviewers has pointed out, it can occasionally feel a bit meandering – but since Henry has rather lost his sense of direction, it’s in the nature of the subject matter that the reader should end up feeling as if he/she is being led around in circles a bit (rather than being propelled in a straight line at Warp Factor 7 directly towards an explosive, coronary-inducing finale).

So, overall, my verdict on "Epitaph for a Coyote" is well worth a read - but my favourite from this author is still "Illinois Corn."