Posted by Paul Samael on Thursday, May 10, 2012 Under: Book reviews 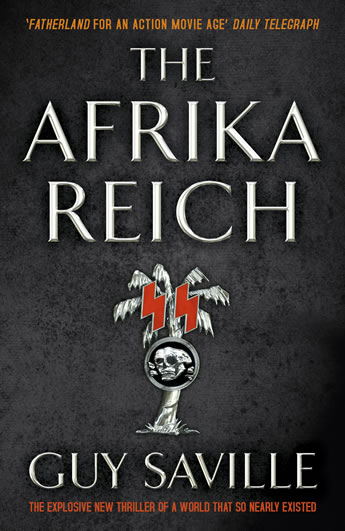 I seem to be on a bit of thriller binge at the moment – just finished “The Afrika Reich” by Guy Savile, a rather more conventional action/adventure-focussed thriller than “Endgame” (which I reviewed last month).  I was interested in it for two reasons.

Firstly, I gather that its author initially tried it out on the peer review site yourwriteon.com, which is something I’ve done with my own writing – so I was interested to see the final product, once he’d been signed up by a proper publisher.

Secondly and more importantly, it has a very interesting premise – we’re in an alternative 1952, in a world where the British reached an accommodation with Hitler after Dunkirk, the Nazis went on to defeat Stalin and then (not satisfied with the amount of Lebensraum in Russia) expanded into large tracts of Africa as well.  Our hero, Burton Cole (who will undoubtedly be played by Daniel Craig in the film version, if there is one), is a British mercenary contracted to do one last job – assassinate Walter Hochburg, a high ranking SS officer and Governor General of Congo.   In many respects it reminded me of “Fatherland” by Robert Harris – especially the way bits of information are casually dropped into the story about some of the horrifying things the Nazis get up to in their Afrika Reich (I won’t spoil it by spilling the beans).

If you like lots of action, then this is certainly one for you – it is very fast-paced and I could see many of the scenes translating very well onto the big screen.  But whilst I might be prepared to suspend my disbelief in the cinema, it’s not quite the same on the page – and I did start to have difficulty believing that our heroes could really survive the cumulative effects of the extreme violence which is inflicted on them as they fight their way across Africa. I would also like to have had more detail about the alternative world, especially its politics, than we actually get.

I suppose the author had to make a difficult choice as to whether he was writing a mass market thriller or a rather more niche book focussing more on the alternative history aspect.  I get the impression he did quite a lot of research but that - possibly - a lot of this had to be jettisoned to make it into the fast-paced thriller that it is now.  My ideal would have been for the publishers to bring out two versions – one exactly the same as the published version and another that takes things at a slower pace and provides more texture and background (a sort of “Director’s Cut”, to use the movie terminology).  Of course, this would have been an awful lot more work for the author and I can’t blame him for opting for the more commercial route – he has certainly produced an extremely effective thriller.

But I’m afraid neither this nor “Fatherland” can displace my favourite WWII alternative history novel, which remains “The Man in the High Castle” by Philip K Dick (currently being adapted for TV by the BBC).  Interestingly, Dick also has the Nazis doing similarly appalling things in Africa, as well as draining the Mediterranean to provide additional farmland (yes, there really were plans to do this).  Somehow he manages to combine high politics and the lives of ordinary people in a way that neither of these two more recent novels quite manages to do.  But well done to Guy Savile for producing such an interesting thriller and managing to get it published.