Posted by Paul Samael on Thursday, July 31, 2014 Under: Book reviews 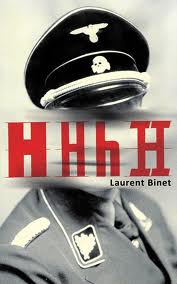 This book by the French author Laurent Binet is described in its blurb as a “novel” but I think it would be more accurate to categorise it as “faction.”  What I mean by that is that the book is based quite closely around actual historical events but it also has certain features in common with other genres, like memoir or, at times, fiction.  I have blogged about faction before – in particular a book called “Red Plenty” by Francis Spufford, who started off writing a factual account of technological and economic progress in the Soviet Union but ended up creating a series of factually-based short stories out of it.  It’s a somewhat eccentric approach but one that works remarkably well.
HHhH provides an interesting contrast to "Red Plenty" because it approaches history from the opposite point of view.  The author sets out to write a work of fiction about the assassination attempt by Czechoslovak partisans on the leading SS figure, Reinhard Heydrich - but every time he tries to dramatize/fictionalise these events, he finds himself wondering how on earth he could possibly know which side of the train a particular historical character was sitting on, or exactly what that person was feeling at the time.  So he keeps coming back to the thorny question of how much we can actually know of what happened, beyond the bare facts.
This might sound like it could get annoying after a while – a bit like watching a Brechtian play where the playwright has overdone the alienation effects.  And it’s fair to say that if you like your history done “straight”, then this book probably isn’t for you.  But the author is careful to keep his digressions on the difficulties of knowing the truth either fairly short or sufficiently interesting in and of themselves to hold your attention.  They also help with the pacing of the main story that he has to tell, which is as much about Heydrich’s rise to power as it is about the Czech and Slovak assassins sent to kill him (the title is short for “Himmlers Hirn heisst Heydrich”, which translates as “Himmler’s brain is called Heydrich” – apparently this is what passed for humour in the SS).
But what is the point of all this musing over the relationship between fact and fiction?  For me, it has to do with the expectations we have of fiction, particularly realist fiction, and how they often fail to marry up with what actually happens in the real world – which is often far more disturbing and unexpected.  For example, the novelist John Lanchester has observed that if you had written a novel about the financial crisis before it happened, it would probably have been dismissed as far-fetched – after all, surely all those terribly clever people working in the financial services industry couldn’t possibly get things so terribly wrong?   And yet that is exactly what they did do, on an unprecedented scale.  And I dare say the same would have been said of a novel written before the Second World War which postulated the industrialised killing of millions of people on racial grounds – which is partly what HHhH deals with (since Heydrich had a major hand in it).
The danger is that realist fiction spends so much time trying to pass itself off as “realistic” that it becomes imaginatively constrained and less able to depict the world as it really is - particularly when it comes to the bigger picture.  Someone once told me that until recently, the worst scenario insurers had been able to imagine was a Harrier jump jet colliding with a jumbo jet over London;  I’ve no idea if that’s true, but if so, the events of 9/11 amply demonstrated what a failure of the imagination it was (no doubt also the product of trying too hard to be “realistic”).