Posted by Paul Samael on Monday, April 29, 2019 Under: Book reviews
Semiosis, Court Out and A Gentleman in Moscow 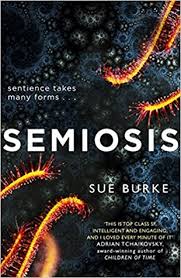 Semiosis by Sue Burke
The initial premise of this novel is a bit of a hoary old sci-fi cliché:  idealistic refugees from an Earth beset by environmental disaster travel to an alien planet (which they name Pax) and attempt to create a better society there, aiming to live more in harmony with their environment.  But it was very well reviewed, so I thought I’d give it a try.  Things get off to a rocky start for the colonists when Pax turns out to be inhabited by sentient plants, some of which respond rather aggressively to the human interlopers.  The first few sections felt a bit pedestrian/formulaic and I wondered what all the fuss was about.  But I’m glad I persevered because it turned into something much more original and thought provoking than your typical humans vs aliens conflict story – not least because some of the plants appear to be more welcoming, including an intelligent bamboo who develops into one of the main characters in the story.
“An intelligent bamboo?  Really?” I hear you ask.  Well, yes, put as baldly as that, it may sound a tad absurd, but we already know that plants on Earth are, for example, able to send messages to one another to warn of pests etc (see this blog post) – so why shouldn’t the author imagine that in a different ecosystem, some plants might have developed those abilities to a level which allows them to think?   And whereas on Earth, humans are very much the dominant species, on Pax, it’s not entirely clear who’s domesticating whom – in particular, you begin to wonder if the bamboo is manipulating the humans for its own ends.  I also liked the novel’s portrayal of the way that, in order to survive on Pax, the colonists are forced to compromise some of their initial ideals – thus avoiding what could, in lesser hands, easily have become a rather pat exercise in “greenwashed sci-fi”.  The novel has its own website here and Sue Burke’s website is here.

Court out by Elle Wynne
A well-written self-published comic novel combining a racy, legal thriller-type plot (our heroine is a barrister) with chick lit-style romantic comedy.  As some other reviewers have pointed out, there were some typos but not enough to spoil my enjoyment of it.  I always struggle to find much else to say about comic writing – it was funny and had a good story, what more do you want?  I’m also hardly an afficionado of the genre, but I would guess that the legal thriller aspect differentiates it from quite a lot of chick lit.  As a lawyer, I can say that the legal aspects felt authentic - although not being massively familiar with the world of criminal law, it’s hard to say exactly how accurate it is.  At the time of writing, it was free on Smashwords.  There's a good number of positive reviews on Amazon too. 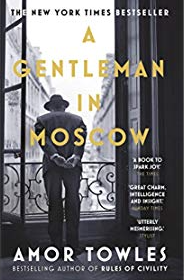 A Gentleman in Moscow by Amor Towles
It’s 1922 and Count Rostov is expecting the usual fate reserved for Russian aristocrats by their new Communist overlords.  However, having written a poem that is seen as an important contribution to the pre-Revolutionary cause, it is decided that it would be bad form to simply shoot him in the head.  Instead, he is sentenced to house arrest in one of Moscow’s grandest hotels.  Booted out of his suite, he is relegated to a servant’s quarters in the attic and forced to earn his keep as a waiter in the restaurant.  The novel follows what happens to him right through to the mid-1950s.
As you might expect, the contrast between the main character’s aristocratic background and the new post-Revolutionary Russia provides a rich source of humour.   It could all too easily have bubbled over into a rather frothy, nostalgic and somewhat rose-tinted view of what was, for many people, pretty awful period in Russian history.  After all, the protagonist ends up being somewhat insulated from the outside world by his house arrest, which means he’s not supposed to leave the hotel (although he does manage it on occasion).  He’s also protected by the fact that the authorities find him quite useful to keep the hotel running, whilst fortunately not being so interested in him that he’s ever at any risk from one of Stalin’s purges.
However, although our hero isn’t directly affected by such developments, other characters that he makes friends with are – and the novel’s handling of these issues is made more effective by not spelling out exactly what happens to some of them and leaving it to your imagination (keeping its perspective aligned with that of the central character, who can only see what goes on within the hotel).  The hotel is also regularly used by the Communist top brass, which allows for a privileged view of what’s going on with the new Russian aristocracy – again, helping to avoid a sense that this is a story taking place in rather splendid isolation from what’s happening in the wider world outside.  The Count also has enough self-awareness to realise that despite its constraints, his “life sentence” might actually make him one of the luckiest people in the country – so rather than chafing against the confines of his existence, he aims to make the most of it, which is one of the things that makes his story such a pleasure to read.
You might also be interested in: