Posted by Paul Samael on Sunday, February 28, 2021 Under: Book reviews
Forbidden, How to be a Liberal and The Defections

Forbidden by Tabitha Suzuma
Young Adult (YA) fiction isn’t usually my thing but on this occasion I’m glad I made an exception - and in any event, I would argue that this book shouldn’t be viewed as “only for a YA audience”.  It strikes me as yet another case of publishers’ unhelpful obsession with genre - although to be fair, hats off to them for having the guts to publish this book, because Forbidden is about (consensual) brother-sister incest.  Eww, you might think.  But good literature often makes you re-examine your assumptions and that’s exactly what this book does.
Lochan and Maya are 18 and 16.  Their father is no longer on the scene and their neglectful mother is hardly ever around, leaving them in charge of their 3 younger siblings.  It is the pressure of these family circumstances which results in the incestuous relationship - because Lochan and Maya have had to take on the role of surrogate parents while they are still children.   Now, with many novels, what I’ve just said there would probably have ruined the plot for you and removed any sense of suspense.  But for me, the really remarkable thing about this book was this:  I knew what was going to happen (at least in general terms) and I also knew it was never likely to end well - and yet despite all that, I still found myself unable to put it down at times and kept hoping that somehow the two central characters would find a way out.  This is testament to the author’s skill in making you empathise with her characters - which is quite some achievement with a taboo topic like incest.
I am struggling to think of many other books which have tackled this subject in a similarly sensitive and thoughtful way.  There is a consensual brother-sister sexual relationship in Paul Auster’s novel "Invisible" (also, I think, prompted by family circumstances) - but seeing as it’s Paul Auster, you’re never 100% sure how you’re meant to take it (did it actually happen or was it just in the narrator’s fevered imagination?).  Forbidden, by contrast, plays it pretty straight - but precisely because the subject has rarely been the focus of other novels, I don’t think it would’ve benefited from clever literary devices and the author was absolutely right to tackle it head-on. 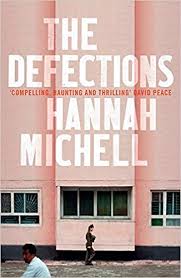 The Defections by Hannah Michell
This unusual literary thriller is set in Seoul, South Korea.  Half-Korean, half-English, Mia has never felt that she really fits in - and appears to take a certain pleasure in not conforming to the traditional ideal of submissive South Korean womanhood.  Her mother abandoned her as a baby, leaving her to be brought up by a dutiful but somewhat resentful step-mother - and her father is an invalid who is unable so speak, so she has never really known him properly either.  She works as a translator at the British Embassy.  Here she develops a somewhat naive infatuation with a diplomat; you are led to suspect that she is more attracted by how he seems to exemplify (for her) an idealised notion of Englishness, than what he is really like.  After she helps him to cover up a drunken indiscretion, they embark on an affair.  Thomas, the diplomat, is then asked to carry out a security audit on Mia and starts to become suspicious of her behaviour.  Meanwhile, Mia’s stepmother is prevailed upon by her Uncle to take in a defector from North Korea - who also feels out of place in South Korean society.  The defector, Hyun-min, keeps disappearing for long periods without explanation.
The book can be slightly frustrating at first because you find yourself asking “why is X behaving like that?” or “what happened to Y in the past?”  - but I’d recommend persevering with it because the various mysteries set up at the outset are ultimately explained in a satisfying way (e.g. how did Mia’s father become an invalid, what is Hyun-min up to when he disappears, what happened during Mia’s childhood etc?).   And although it incorporates certain spy/political thriller elements, which are more to the fore towards the end, I’d say it’s really more about the tendency for people to misinterpret each others’ motives based on their own ideals/desires, particularly against the background of a society like South Korea which has quite rigid expectations of behaviour and feels under threat from its neighbour to the North.

How to be a Liberal by Ian Dunt
This is a history of liberal thought - which makes it sound quite abstract, but it’s very accessible and about as close to being a page-turner as this kind of book gets.  I suppose it helps if you think that liberalism still has something beneficial to offer the world, which I do - so maybe I was predisposed towards liking it (I happen to think that liberalism’s emphasis on the rights of the individual is really important and currently in serious danger of being trampled on by politicians who claim to be enacting “the will of the people”).
If you already know quite a lot about figures such as Benjamin Constant, JS Mill (and his collaborator Harriet Taylor), John Maynard Keynes and Isaiah Berlin, then maybe it isn’t for you.  I didn’t know that much about them and more generally, the book told me a lot about history that I was only dimly aware of, particularly the extent to which liberalism developed during the English Civil War.  In fact, it left me wishing that the history curriculum taught in UK schools concentrated a bit more on some of the events covered in this book (rather than the Tudors and the Second World War) - because I don’t think it’s helpful that as a country we are quite so fixated on myths of our own greatness based on defeating the Spanish Armada and the Nazis.
Anyway, it succeeded in convincing me that, even though liberalism currently seems to be flummoxed by the nationalistic populism espoused by politicians like Trump and Boris Johnson, it will eventually find a way to respond (and a more receptive audience), just as it has done many times in the past. That said, my fear is that “eventually” may need to be measured in decades (it will certainly take decades to repair the damage done by Trump and Brexit, for example) - and this book does not claim to have much of an answer to this particular conundrum, although it does suggest that liberalism needs to find a better way to balance the rights of the individual against people’s desire for community and social cohesion.

Tags: forbidden "tabitha suzuma" "the defections" "hannah michell" "how to be a liberal" "ian dunt"
« Back to posts