Posted by Paul Samael on Saturday, October 15, 2022 Under: Book reviews

It’s been a while since I’ve done one of these posts (the last one was a year ago, which is hardly the level of regularity I was aiming for).  That’s partly because I’ve been busy with other things, including trying to make some more progress with a story about China that I started ages ago (I’ve got about 25K words so far and it’s not like I’ve got stuck with the plot or anything - it’s just finding the time to write that’s the problem, especially given my glacial pace…).
The other reason for not having done any reviews lately is that I prefer to pick books that I was quite enthused about and/or are by lesser known authors.  But just lately, I don’t seem to have read all that many books which met those criteria.  I sometimes also pick books that I thought were rather overrated - and I could easily have filled a post with those (but I don’t want to be negative the whole time, so I usually confine myself to one book in that category per post - see the third book below).  Aside from that, there were also a lot of books that I quite enjoyed, but not enough to feel motivated to really enthuse over them here. 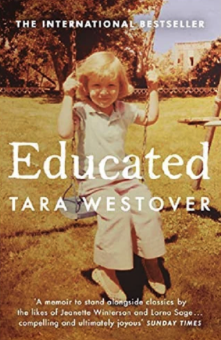 Educated by Tara Westover
This is an utterly compelling memoir about the author’s upbringing in a patriarchal, ultra-conservative, ultra-religious family in the US.  They've largely opted out of normal society, so she doesn’t get to go to school, despite being super-bright - instead she’s put to work with her siblings in the family scrap yard/death trap, which her father runs with a quite spectacular disregard for rules about health and safety, to say nothing of prohibitions on child labour etc (producing some fairly horrific results at times).  Sounds grim?  Well, it is, in parts - but she eventually manages to escape and get herself the proper education that she ought to have been entitled to in the first place.   What particularly struck me was the hold that her family managed to exert, not only over her but over almost all of her siblings, despite an appalling level of mostly mental but sometimes also physical abuse.  It’s an extraordinary story which is very well told.  Couldn’t put it down.

The Paper Menagerie by Ken Liu
I’m not normally that keen on “if you like X, you’ll like Y” sales pitches because they just lead to consuming “more of the same”.  But the pitch here was that if you like the stories of Ted Chiang, you might like Ken Liu’s work - and being a big fan of Ted Chiang, who I think is an exceptional writer, I succumbed.   There are some really good stories here and if you read nothing else, try The Man Who Ended History, which is about time travel, Unit 731 (a part of the Japanese army which committed atrocities on Chinese civilians in WWII) and Japan’s failure to offer a proper acknowledgement and apology for this (you can download it free here).   For me, that one definitely stands comparisons with Ted Chiang’s work, especially in its thoughtful and though-provoking treatment of a difficult and sensitive topics.  Several other stories also come reasonably close.  However, I wasn’t 100% convinced by the comparison.  It’s also unfair to the author, as he’s got his own style and preoccupations which are quite different from Ted Chiang.  For example, quite a few of the other stories in the collection were more fantasy than sci-fi, often drawing on (for me unfamiliar) aspects of Chinese culture, which was quite interesting.  Whilst I liked some of these, a fair few just weren’t really my cup of tea (but I shouldn’t complain - it was worth buying the whole collection just to have read The Man Who Ended History).  Ken Liu is also the translator of The Three Body Problem by Cixin Liu, which I reviewed a few years back.

A Ghost in the Throat by Doireann Ní Ghríofa
This is essentially a memoir that interweaves various episodes in the author’s life (traumatic premature birth of fourth child, breast cancer scare etc) with her obsession with the Irish poetess Eibhlin Dubh.  I found some of the personal episodes quite compelling but as the book goes on, it focusses increasingly on the poetess obsession - which failed to hold my interest.  I could admire the quality of the prose - but that wasn’t enough for me.  Slightly longer review on LibraryThing here.

Tags: educated "tara westover" "the paper menagerie" "ken liu" "a ghost in the throat" "doireann ni ghriofa
« Back to posts