Posted by Paul Samael on Sunday, September 28, 2014 Under: Book reviews

“Pedalling Backwards” by Julia Russell is a very well written literary novel which has attracted an impressive haul of positive reviews on Amazon, and two five star reviews (including mine) on Smashwords.
Lizzie, her husband and her parents have rented a holiday cottage on a bleak, muddy island in the Blackwater Estuary.  What could possibly go wrong?  Well, for starters, Lizzie has recently lost a baby.  Her husband thought it would be a good idea for them both to get away from things for a bit, but didn’t seem to fancy the idea of being on his own with Lizzie the entire time.  So he invited her parents.  The trouble is, Lizzie’s relationship with them (especially her mother) is not an easy one.  Added to which, Lizzie herself can be pretty infuriating at times.  So the atmosphere as we join them in the cottage is, well, a little tense.  All the ingredients, I’m sure you will agree, of a really super-duper, relaxing holiday.
One thing’s for sure, it isn’t chicklit, as the author has been at pains to point out (I hope she won’t mind me reproducing this graphic): 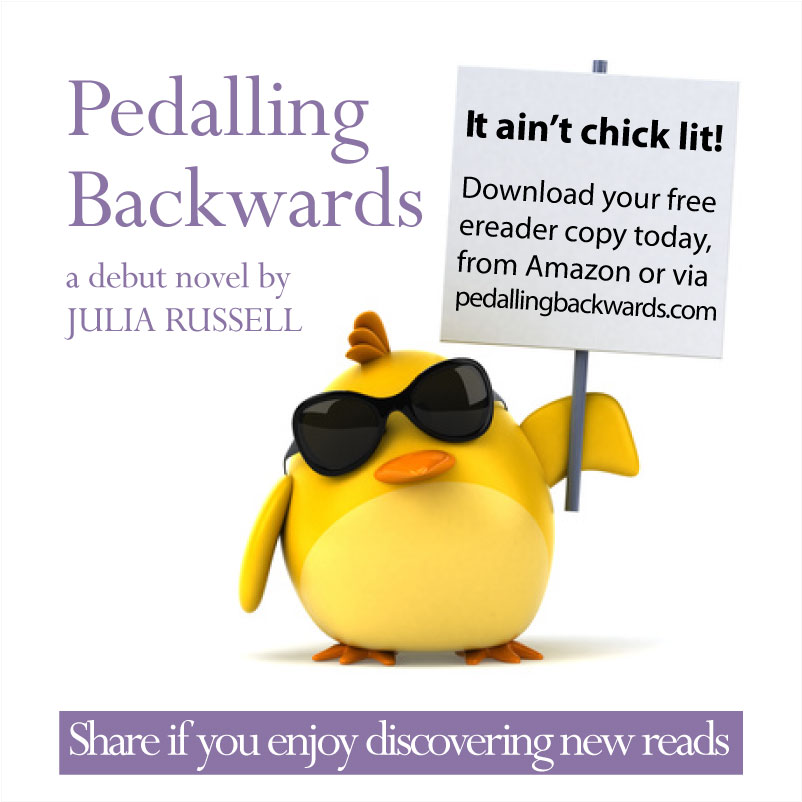 That said, given my description of it so far, you could be forgiven for thinking that it might possibly be a teeny bit hard going - and maybe even something of a misery-fest.  But I’m happy to report that it turned out to be much more of a page-turner than I initially expected.  It’s true that Lizzie’s behaviour is infuriating at times, even for the reader, but I wanted to know why she was behaving like that and in particular, why her relationship with her parents is so difficult – so for me, her behaviour set up a mystery that I wanted to find the answer to.  The other thing that really held my attention was the quality of the writing itself – for instance, I found myself nodding in recognition at the depictions of the awkwardness of group and family behaviour in the various “set pieces” on the island (the novel weaves between these and Lizzie reflecting on various events in her past – not just the loss of her baby, but her relationship with her sister as well).
Yes, some of the subject matter is quite depressing and yes, I sometimes wanted to shake Lizzie out of her passivity and force her to stop dwelling on the past.  But this is quite a compact novel (just under 60,000 words) so I didn’t feel as if the actual writing was dwelling unnecessarily on those events – and personally, I don’t subscribe to the school of thought which holds that writers should only be telling stories in which everyone lives happily ever after (see this post).
I certainly didn’t feel that “Pedalling Backwards” was unremittingly bleak in its outlook, because it does show a possible way out for Lizzie.  For example, at one point, her sister remarks somewhat enviously upon Lizzie’s ability to simply enjoy the moment, without bothering about what other people think.  And by the end of the novel, I had the feeling that Lizzie had begun to recognise that this ability offers her a way out of dwelling on a difficult past which she cannot change.  The author certainly has a talent for short, striking descriptions which successfully convey some of these transitory moments – for example, she is particularly good on food and the novel has a very strong sense of place (Professor Google couldn’t point me towards any islands called Storsea in the Blackwater Estuary but from the descriptions in the novel, the setting sounds a lot like Osea Island).
In a slightly stream of consciousness way, the rather bleak, muddy setting was one of the things about “Pedalling Backwards” which reminded me a little of “The Third Person” – another free, self-published novel which I have reviewed here.  Both feature somewhat unsympathetic narrators (coincidentally both called Lizzie), both focus on sibling relationships and both deal with fairly challenging subject matter (but in a very readable manner).  Also, both fall into the category of novels that I probably wouldn’t have picked out in a bookshop as “books that I would probably like” - but that for me has been one of the unexpected pleasures of reading free fiction (see this post).  So although in my opinion both novels were good enough to have been picked up by a commercial publisher, I’m glad the authors went down the self-publishing/not-for-profit publisher route - because if they hadn’t, I’d probably never have read them.
If I have a criticism of “Pedalling Backwards,” it’s that it didn’t fully explain why Lizzie’s parents are the way they are (this is only really hinted at) – but as the story is told from Lizzie’s perspective, it would be difficult to go back into their past and find out.  And maybe in that respect, the novel just reflects reality – after all, how much does any of us really know about our parents’ past and what influence it has had on them?   There is a scene in the novel where Lizzie and her sister are looking at old photos of their parents, taken before either of them was born, and having thoughts along those lines.  So I’m not convinced that this is necessarily a fair criticism of the novel – and in pretty much every other respect, it more than met my criteria for a “good read.”
At the time of writing, “Pedalling Backwards” was available free from Smashwords here.  The author’s website is here and there’s an interview with her here.
You might also be interested in these recommendations: