Reviews of: Machines Like Me by Ian McEwan, Klara and the Sun by Kazuo Ishiguro, Speak by Louisa Hall and The Lifecycle of Software Objects by Ted Chiang
I’ve been thinking about genres lately because I’ve been trying to get more downloads of my novel on Amazon - and if you’re using various book promo services, as I am doing right now, you usually need to tell them what genre it’s in.  The trouble is, the novel effectively straddles 2 genres which publishers and platforms don’t usually bracket together, namely sci-fi and literary fiction.
On Amazon it’s listed in both categories, although in sci-fi you have to nominate a sub-category, so it’s in “Metaphysical and visionary”.  I thought I could justify slotting it in there because it has a reasonable amount of material about God, belief and the Technological Singularity.  If you’d asked me for other books that might fit into that category, I’d have suggested something like "Valis" by Philip K Dick (the picture at the top of this post is an AI robot version of PKD, in case you were wondering).  Yet most of the other books listed under that rubric look to me more like standard space-opera type stuff.  Oh well.  Meanwhile in literary fiction, a fair proportion of the books it is appearing alongside look to me like they lean more towards the romance/chick lit category.

So despite my belief that the novel has elements of both sci fi and litfic, when you look at what else is in those categories on Amazon, the book ends up looking like a fish out of water in both genres.  I am slightly dreading negative reactions from readers saying “there should’ve been more spaceships/less of the tech stuff” - but I’m not sure what can be done about it, because if you refuse to specify any genre, then you’re even more invisible.
All that is by way of a rather lengthy preamble to the real subject of this blog post, which is the slightly awkward relationship between sci-fi and litfic - as highlighted by some recent novels about artificial intelligence.  Litfic has a long tradition of attempting to depict the workings of human consciousness, so in principle it should be a promising approach when it comes to a topic like AI - witness recent efforts from high profile litfic authors like Ian McEwan and Kazuo Ishiguro. Yet McEwan seems curiously reluctant to acknowledge that it could be regarded as sci-fi.  His attitude is summarised in a Guardian article: “He has little time for conventional science fiction.  ‘There could be an opening of a mental space for novelists to explore this future, not in terms of travelling at 10 times the speed of light in anti-gravity boots, but in actually looking at the human dilemmas of being close up to something that you know to be artificial but which thinks like you’.”  Oh right, like sci fi has never managed to do that before….

McEwan’s latest, “Machines like Me”, is all about a new generation of lifelike, artificially intelligent robots.   Instead of situating it in the future, it’s set in a counterfactual 1980s, where Alan Turing was not hounded to death by the UK authorities for being gay.  Instead, he goes on to invent loads of amazing stuff and make it all available on an open source basis, thereby promoting rapid take-up - so there is already an internet of sorts, for example.
This whole “future in the past” idea was quite diverting in its way - but I also came to suspect that it was intended to distract you from thinking too hard about whether the world of the book was plausible.  For example, how credible is that there really could’ve been robots of this level of sophistication by the 1980s, when actually we are some way off that even now - see this Philip K Dick robot  - and what we actually had in the 1980s was the ZX81 with its 1K of RAM and the Sinclair Spectrum?

That in turn led me to question the credibility of a lot of the other background counterfactual stuff we were being told.  For example, McEwan has the UK economy beset with the same problems that it had in the late 70s/early 80s - but I found myself wondering why, if the internet has come much earlier in his counterfactual, it hadn’t had the same disruptive effect that it’s had in our world.   I’m being a bit harsh on it, because McEwan can tell a good story and some aspects of the counterfactual - like the UK losing the Falklands War - were interesting and I enjoyed thinking about it.  But I’m not sure his attempt to tackle artificial intelligence breaks any new ground - and that was after all the main subject of the novel.

I had similar issues with Ishiguro’s latest, "Klara and the Sun".  Klara is a similarly lifelike, artificially intelligent robot designed to be a perfect childhood companion.  She develops her own belief system about the effect of the sun - but whilst that made sense on one level (since she is solar powered), all she’d need to have done was looked it up on the internet to see that her belief system was utter nonsense (but that never happens).  Maybe it’s because she is programmed not be curious enough to want to seek out other information that might support or contradict her own observations - but that issue is not really addressed. 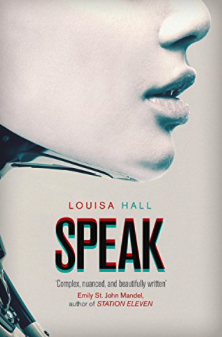 "Speak" by Louisa Hall was a more satisfactory marriage of sci fi and litfic - and it too aims to tackle artificial intelligence, focussing on the ability of AI to mimic human conversation (very much as envisaged in the Turing test), rather than think super-intelligent thoughts.  The AI in the novel, Mary3, has learned its language through being “fed” with the narrative accounts of numerous individuals  (as it happens, Google has been doing something similar by feeding an AI with lots of free fiction from Smashwords in the hope this will improve its natural language ability).  The novel consists of a selection of these accounts - and in that respect, the litfic approach was very effective.
The narrators include a puritan girl from the 1600s, Alan Turing (yes, him again), a Jewish scientist who wrote the original AI programme (apparently based on Joseph Weizenbaum who wrote a similar conversational program called ELIZA) and an inventor called Stephen R Chinn.  It becomes apparent early on that Chinn has used Mary3 to provide the language for lifelike “babybots” - but is now imprisoned following a backlash against these types of AI.  The reasons for the backlash are gradually revealed as the novel develops - which helps to keep the reader’s interest in what would otherwise tend to come across as a series of rather loosely connected first person accounts.
Here, there are some similarities with “Klara and the Sun” (because the babybots are also promoted as "perfect" childhood companions), but I felt that “Speak” showed a better understanding of how an AI might actually learn to mimic human conversation.  It also made me think about how much of what we regard as “consciousness” is connected with our ability to use language to translate our experience into stories - which is very much litfic territory.  By contrast, I felt that both McEwan and Ishiguro were largely just taking sci-fi ideas and giving them a litfic sheen of respectability, so that readers who would normally never touch sci-fi with a barge pole would feel OK about reading it (although credit where it’s due, I couldn’t really find much fault with the prose style).  It’s just that, unlike “Speak”, there wasn’t much attempt to co-opt a litfic-style approach to illuminate those sci-fi concepts in a new way. 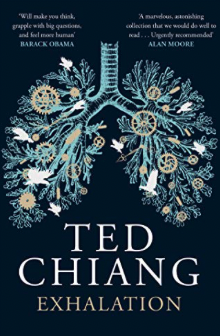 I’m going to round this off with Ted Chiang’s novella, "The Lifecycle of Software Objects" (available in the collection "Exhalation").  Chiang is probably regarded primarily as a sci-fi author, but for my money he’s a good example of an author who is “actually looking at the human dilemmas” of new technology - and so measured by McEwan’s yardstick, he ought to be regarded as a litfic author as well (what’s more, there aren’t even any anti-gravity boots in the story).
The novella is about “digients”, artificial life forms living in a virtual reality, initially marketed as a kind of virtual pet.  But their human “owners” form attachments to them in a way that is remarkably similar to the relationship between parents and children - not least because the digients learn and develop in a very similar way, starting off just playing with simple toys and having limited language, then gradually exhibiting more sophisticated forms of behaviour as time goes on.  Along the way, they and their human “owners” also have to contend with various challenges, including threats from various unsavoury characters on the internet, the obselesence of the virtual platform that the digients were originally designed for and decisions about whether the digients need to be allowed to determine their own futures.
Chiang’s point is that AI which genuinely mimics human consciousness might not be something that could just be programmed and switched on - it might have to learn and develop in the way that humans do as they grow up.  Combined with the sympathy he manages to generate for both his human and digient characters, this made it a more satisfying read for me than any of the above efforts from writers who are more known for litfic efforts.  In terms of style, I also liked the fact that it was quite simply written, with little in the way of elaborate description, and that he has not tried to pad it out to novel length (I think brevity is a rather underrated virtue - albeit that with this particular blog post I have failed dismally to follow my own advice....).