Taking Candy from the Devil

Posted by Paul Samael on Saturday, October 10, 2015 Under: Book reviews 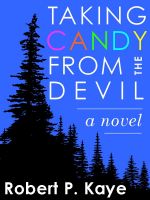 UPDATE 2017:  Sadly, this novel is no longer available via Smashwords or anywhere else as far as I can see.  After my review below, the book got at least one more 5 star review, which may have enough for the author to get an agent or publisher interested in his work - or he may just have decided that he wanted to revise it.  Who knows.  Anyway, let's hope it re-emerges in some form in the future.

Tags: "taking candy from the devil" "robert p kaye"
« Back to posts