Posted by Paul Samael on Monday, October 31, 2016 Under: Book reviews 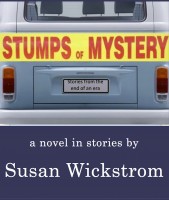 “Stumps of mystery: stories from the end of an era” by Susan Wickstrom describes itself as “a novel in stories” – and it’s certainly true that it occupies a space somewhere in between a full-blown novel and a book of short stories.  Structurally, it’s similar to some of David Mitchell’s fiction, where you get a series of separate but linked stories - I am thinking in particular of “Ghostwritten” and “Cloud Atlas”.
But whereas Mitchell tends to leap around a lot in terms of time, space, style and genre, the stories in “Stumps of mystery” are all about the inhabitants of a small town in Oregon called Woodhill around 2007-8, towards the end of the George W Bush presidency (hence, presumably, the “end of an era” reference).   The point of the Mitchell comparison was mainly to demonstrate that in the right hands, such an unconventional structure can work very effectively – as it does here, even though this is a very different kind of novel.
With the exception of the last section of the book, each chapter takes the point of view of a particular character – these range from a PR consultant who’s just moved to Woodhill from NewYork through to a park ranger, a Mexican immigrant, the sister of a tree-sitting environmental activist and a 13 year old whose older big brother is fighting in Iraq.  Until the last section, there is not much linking them all together – indeed, there is barely any plot at all - so you may well be asking yourself, what kept me reading it?
Well, partly it was an interest in spotting links between stories – because although there is virtually no connecting plot, there are points where they intersect, such as when characters dealt with in an earlier story crop up again in a later one.  Often it is clear that the characters do not know one another particularly well socially - their paths just happen to cross in a fairly random manner, as befits the rather atomised existence that most of us lead these days.  Although the tangential nature of many of these links might sound frustrating, they succeeded for me in conveying a sense that the stories were all heading somewhere – and sure enough, the much more plot-driven final section brings together many of the characters and themes developed earlier on.   It centres on a tragic event and has elements of a “who dunnit?” mystery – but I won’t say any more about it so as not to spoil the story.
Even if the book had been without this final section, I would still have enjoyed it simply as a “composite” portrait of the diversity of human life in a small town in Oregon at a particular time in the early twenty-first century.  This was mainly because the characterisation is so well done.   It is no mean feat to take you right into a particular character’s world in just one short chapter, especially with such a wide variety of characters, but Susan Wickstrom manages it very effectively. All the protagonists are portrayed with considerable warmth and empathy – and alongside that, the stories explored some serious social issues, such as same sex relationships, immigration, finding out your unborn child has a disability, environmental concerns and so on.  So for me, each chapter was a satisfying story in itself – but for readers who are hungry for more plot, I’d say keep going, your patience will be rewarded in the final section.
All in all, a very well written literary novel with an unconventional narrative structure – and one that came as a welcome reminder - amidst my general level of dismay at the state of the world and in particular the utter stupidity of Brexit - that sometimes good things can come out of adversity or tragedy.

At the time of writing, Stumps of Mystery was available to download free of charge from Smashwords HERE.

Tags: "stumps of mystery" oregon "susan wickstrom"
« Back to posts