Posted by Paul Samael on Monday, June 27, 2016 Under: Random thoughts 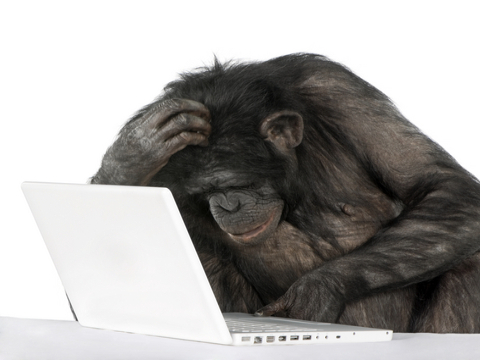 Some thoughts on the EU referendum result.
Now we know why, when they are feeling frustrated with us (as well they might right now), the Germans refer to us as “Inselaffen” (island apes).  Here’s a picture of one of those island apes watching a graph of his currency dropping to a 30 year low against the dollar (having at long last managed to switch on his laptop).

If you have read any of my previous, rather geeky (and evidently totally ineffectual) posts on Brexit (they start here and they just go on and on, I'm afraid), you will know that I think we are making a mistake in leaving the EU.  But never mind the fact that we don’t seem terribly interested in getting along with our nearest neighbours any more.  What worries me more is this:

Can the Inselaffen get along with each other in their own country?

Officially, we are known as the “United Kingdom”.  We also still like to call ourselves “Great Britain”.  But both the “united” and the “great” are ringing pretty hollow after this vote.  If you look at who voted out, you find that the Brexiteers assembled a somewhat bizarre coalition of moderately comfortably off but extremely grumpy little-Englanders (mostly aged over 55) and poor people with few qualifications (who have far more reason to be grumpy – alas, it’s unlikely that leaving the EU is going to help them).  What these people seem to have in common apart from being grumpy is a sense of national identity rooted in Britain’s past as a nation that had an empire and stood up to the Nazis in World War II – whereas remainers are generally less nostalgic and either more idealistic (“we all need to work together”) or more pragmatic (“the EU isn’t perfect but it’s a big bad world out there and we’re better off in than out”).
Younger voters (up to about age 45) voted strongly in favour of remain.  Many of the older people who voted out are more secure economically because they own their own homes and benefit from final salary pension schemes which guarantee their income in retirement.  By contrast, many younger people can’t afford to buy a house and have money purchase pension schemes, whose eventual payouts are heavily dependent on how the economy does.  So we now have a situation where those with longer to go until retirement and a bigger stake in the UK’s future economic performance are being forced down a road they didn’t want to take – but they are the ones who will pay the biggest price if it turns out to be a mistake.
It is just possible that some good could come of the referendum result if it makes government do more to help some of the less well off in society.  I hope it will.  The problem is, that is likely to require the older generation of little-Englanders to make sacrifices - such as paying more tax, getting fewer retirement benefits from the state and accepting that our uber-restrictive planning rules (which have nothing whatsoever to do with the EU, by the way) are one of the biggest constraints on economic growth.  I can’t see them being prepared to make those sacrifices – if they are forced to, they will just become even grumpier and unfortunately, they are too important a group to ignore electorally (since older people tend to vote more – as amply illustrated by the referendum result).
There are also stark regional divisions.  Scotland and most major urban centres voted strongly to remain, but much of the rest of the country voted to leave.  The urban centres, particularly London, are the ones which have generally seen the most migration – yet by and large, they appear to be reasonably at ease with it (as shown by the strong remain vote).  Areas with the least immigration, by contrast, are those where people were more likely to cite it as a reason for voting to leave.  So you have a situation where people who voted remain feel that they are being pushed out of the EU by people who voted to leave because of something that does not directly affect them (see this article).  And as if managing the complex and difficult process of leaving the EU were not enough for the UK  government to deal with, there is a possibility of a further referendum on Scottish independence – raising equally complex separation issues if Scots vote to leave and further diminishing the country that used to be known as “Great Britain.”
Perception vs reality
But perhaps the most depressing thing about this referendum is the massive disconnect between people’s perceptions and what can be established from looking at hard evidence.   Clearly many people voting in the referendum perceived immigration as a huge problem which was making their lives worse.  But where’s the hard evidence that immigration really is as big a problem as that in the UK?  As noted above, in areas with high immigration, people generally voted to remain.   The perception that immigration is a massive problem has more to do with UKIP pushing it as a political issue (with considerable success) and the media getting hold of it – so it has assumed an importance out of all proportion to its actual day-to-day effect on ordinary voters.

Similarly, some of the areas which voted most strongly to leave the EU are – if you look at the statistics – more heavily reliant on exports to the EU than other areas of the country (see this report, which predates the vote, and the end of this blog, which shows that the referendum outcome tallied with the report's prediction).  Yet they have voted in a way which is likely to make life more difficult for key employers in their area (because those businesses could face having to pay tariffs on their exports – and will certainly have to deal with additional customs red tape - see here for more explanation).  Again, the perception is that EU membership is hindering us economically when most of the evidence points the other way.

Lies vs truth, heart vs head
It’s not just politicians who are to blame.  The media’s coverage of the referendum has not helped to promote informed debate.  Many right-wing newspapers sided with leave and did not ask hard questions of the leave campaign.  Others were more interested in the conflict within the Conservative party and played up that aspect, rather than focussing on what leave would really mean – and reaction after the outcome suggests that some people who voted out had not fully appreciated the impact it has had already and will continue to have for years to come.
Polls suggest that quite a significant number of people trusted the BBC to provide impartial coverage (enough, possibly, to have made a difference to the outcome).  But the BBC was so obsessed with fairness and balance that all too often, it adopted a position suggesting that neither side’s claims could be believed.  For example, in a so-called "Reality Check" piece on how long it would take to leave the EU, the BBC concluded feebly that “[w]ithout a crystal ball, neither side can be certain their hopes, fears or forecasts will turn out to be true.”  This is absolutely pitiful stuff from what is supposedly one of the world’s leading news organisations.  There was ample evidence based on past experience that complex international agreements of the type that will be needed now that we are leaving the EU are rarely capable of being concluded quickly and the article should have made that point – because it was important for people thinking of voting to leave to appreciate that there was a high probability of an extended period of considerable uncertainty (which we are now in).

By failing to provide any assessment of the credibility of the arguments put by either side, the BBC has helped to foster a sense that you can’t believe anything politicians say – so why not just stop listening and toss a coin?   The dismal level of debate has tended to make people vote more with their heart than their head on EU membership (see this post), having either given up listening or given more credibility to arguments of leave campaigners than they deserve.  As I have attempted to demonstrate in the last 5 posts, the arguments in favour of leave had a veneer of intellectual respectability and considerable emotional resonance, but most of them were highly questionable when subjected to more detailed scrutiny – and some, such as the claim that we will save £350 million a week on contributions to the EU budget were outright lies (the true figure, based on what we actually pay, is about half that).  Yes, the remain campaign were also guilty of peddling exaggerations and misleading statistics – but in a contest for who told the biggest whoppers, leave is far and away the clear winner (which sends a very cynical message about how to win votes).

The media is only now starting to ask those hard questions of the leave campaign.  Under that scrutiny, it is fast becoming apparent that the Brexiteers do not have a coherent exit plan ready and waiting (even though many of them say they have been waiting all their lives to leave – surely long enough to come up with a detailed plan?).  They are also frantically backpedalling on numerous campaign assertions which many voters took to be promises about how wonderful life will be if we leave.  What a shame they were not subjected to the same scrutiny before the vote.  We now have an outcome which is encouraging only for "divide and rule", right-wing populists like Donald Trump and Vladimir Putin.
And who is going to put Humpty Dumpty back together again now that he has hurled himself off his perch?  Supposedly our great saviour is none other than Boris Johnson, our very own Trump-lite (a man equally casual with the truth yet also inexplicably popular).  Apparently he has spent this morning saying that we can regain full control of immigration at the same time as maintaining full access to the EU single market.  No doubt he did seven other entirely impossible and contradictory things before breakfast this morning.  So it'll all be fine, I'm sure.  Here's a heartwarming picture of him with the Donald (watch those hairstyles go head to head !). And here's some footage of the House of Commons Treasury Select Committee demonstrating that far from being Prime Ministerial material, Boris is just an ultra-ambitious ex-journalist who doesn't believe in letting the facts get in the way of a good story.
Anyway, back to my graph-watching.  Oh look, the pound just has fallen again.