Posted by Paul Samael on Wednesday, November 21, 2012 Under: Random thoughts 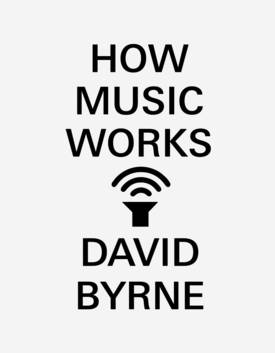 I recently finished “How Music Works” by David Byrne (my thanks to Tom Lichtenberg for alerting me to its existence), which is full of interesting ideas and analysis about music – and some fascinating facts about how it’s developed over the years.  Byrne’s main argument is that we place too much emphasis on the influence of the artist’s personality or “soul” – and too little on more contextual  factors like the technology available to them, the environments they had to play in and so on.
For example, he explains how choral music tends to involve relatively slow-paced compositions because this is what sounds best in an echoey environment like a church or cathedral – if you had very fast compositions, it would start to sound pretty cacophonous and give everyone a headache (hardly the desired effect).  Or another example is how the first recordings tended to make singers sound quite nasal and clipped in their delivery – so when they were sent out on tour, they were told to adjust the way they sang (in order to sound more like the recordings which had drawn the audience to the performance in the first place).
Anyway, it’s well worth a read (even if you don’t like David Byrne’s music – it’s definitely not a “rock memoir”).  My only criticisms of it are directed at the publisher.  Although the ideas and analysis are great, it's a bit baggy at times (a bit like Mr Byrne's big suit in the "Stop Making Sense" film).  I think some sections could have done with a bit of editing, which would have made for a shorter, more focussed read (but I get the impression that most publishers don’t really do editing any more).  And why – in the Kindle edition – couldn’t the photos have been placed next to the bit of text which talks about them (instead of several paragraphs further on)?
But my main reason for talking about it is that it got me thinking about the impact of ebooks on fiction.  I’ve rambled on in previous posts about their impact on length e.g. on sites like Smashwords, there are at least as many shorter pieces as novel length ones, whereas if you go into any bookshop, novels vastly outnumber short stories.  But then I wondered why ebooks haven’t had a more fundamental impact, equivalent say, to the introduction of electric guitars, synthesisers and other technology on music. For example, a book has to progress in a linear fashion – whereas an ebook could, in principle at least, jump around all over the place if it was set up that way e.g. by offering the reader several choices at the end of a section as to which direction they wanted to head off in next.  And with the advent of tablets with multi-media capabilities, audiovisual material could be integrated alongside the text – something else you can’t do in a book.  So why isn’t technology influencing authors in that direction?
I think there are probably several reasons for this.  One problem is that it’s actually quite hard work to make use of the “opportunities” for new approaches offered by ebooks.  For example, I could in theory produce a story that uses a lot of graphics, video and hyperlinks and set it up as a series of web pages.  But to do all of those elements really well would require a team of people with all the right skills, so most authors working on their own (including me) would be hard pressed to do a good job.   And I know from producing my own book trailers that even a minute of video can take several hours to put together - so it would make me even less productive on the writing front than I already am.  As for moving away from the linear structure of books, devising a narrative that could go off in numerous different directions (depending on choices made by the reader) strikes me as a pretty demanding task.  Personally, I have enough trouble working out one plot line, let alone ten or twenty variants…..
And then of course, it may well be that in largely ignoring these potential capabilities of ebooks, authors are actually responding to what readers value most about books.  For example, if you compare novels with film adaptations, a lot of readers will tell you that they prefer the novel because it allows them to generate their own personal imagery and soundtrack in their own heads – so why bother adding in lots of multimedia gimickry?  As for linear structures in fiction, our preference for these can probably be explained at least in part by the fact that life’s like that – we exist from one day to the next, following a linear track (we do not jump around in time like the character in “The Time Traveler’s Wife” or Billy Pilgrim in “Slaughterhouse 5” – interesting though both novels are).  And a story that jumped around all over the place in a completely random fashion (the reading equivalent of iPod shuffle mode) would almost certainly be well nigh unreadable.
So for perfectly good reasons, I think we are probably quite wedded to the existing format and structure of books – and the main impact of ebooks is going to be on the structure of the publishing industry, rather than the kind of thing that gets published.

POSTSCRIPT - October 2013 - whilst updating my page on self-publishing, I noticed that Apple has produced what looks to be quite a nifty piece of (free!) software for called iBooks Author, designed primarily for the iPad.  I haven't tried it out but it did make me wonder if I might have been over-hasty in suggesting that technology isn't going to have all that much of an impact on how we write books.  This was mainly because the software looks as if it provides quite an attractive and straightforward way of integrating interactive and audiovisual elements with text.  And Apple being Apple, the demo books all looked extremely cool (well they would, wouldn't they?).  Of course, no matter how easy Apple have made the software, there is still a problem - which is that producing an ebook with that level of interactive and audivisual content requires a considerable additional investment of time and/or money (probably both).  But it is at least within reach for those that are prepared to make that investment.

UPDATE - August 2015 - I suggested above that, at least in theory, ebooks have the potential to allow authors to move away from linear "single track" narrative structures and write stories with a number of parallel plot lines, which the reader could choose to follow in different ways.  If that sounds interesting to you, you might want to check out Arcadia by Iain Pears, which appears to be an attempt to do just that (it is really meant to be consumed as an app) - but as he admits in this article, it has not been an easy process and my sense is that it is unlikely to become commonplace until (a) we all (by which I mean both writers and readers) get more used to that kind of story-telling approach; and (b) technology gives us more of a helping hand with the structuring of it all, which I suspect is likely to be a rather more complex task than with a conventional narrative (and goodness knows, those can be complicated enough....).

UPDATE - March 2019 - The recent Netflix TV series "Black Mirror: Bandersnatch" also experiments with a non-linear approach allowing the viewer to choose which narrative paths they want to go down.  But as this review points out, if you're used to plonking yourself down in front of the TV and just "switching off", this approach to narrative may not be your cup of tea, as it's a lot more demanding on the viewer (to say nothing of the demands on the writer, having to juggle numerous different possible story arcs etc).  Again, I think this highlights the challenges in getting readers/viewers used to a different approach.  I suspect that part of the appeal of TV or indeed books is that in our daily lives it can often feel as if we are confronted with too much choice, which can in turn feel somewhat exhausting - and so there's something to be said for spending time with a medium where someone else has made all the choices for you.