Posted by Paul Samael on Sunday, March 26, 2017 Under: Random thoughts
Went on the pro-EU march in London at the weekend - which may be something of a futile gesture, as Theresa May seems set to give notice to leave under Article 50 this week.  But if it helps to deter some of those in government from pursuing some of the more extreme forms of Brexit which are being seriously talked about (such as walking away without any sort of deal at all with the EU - absolute madness in my view), then it will have been worth it.  There were quite a few good placards but my favourite (although it's not really a placard) was this creation, which sums up the whole enterprise for me: 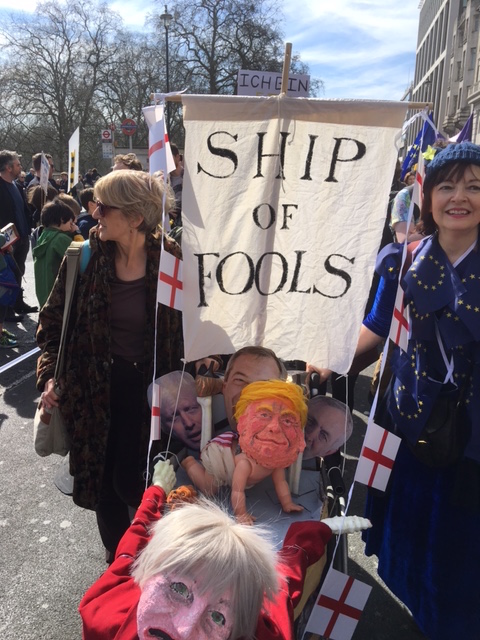 I was thinking along similar lines with my own effort - here's the more amusing side: 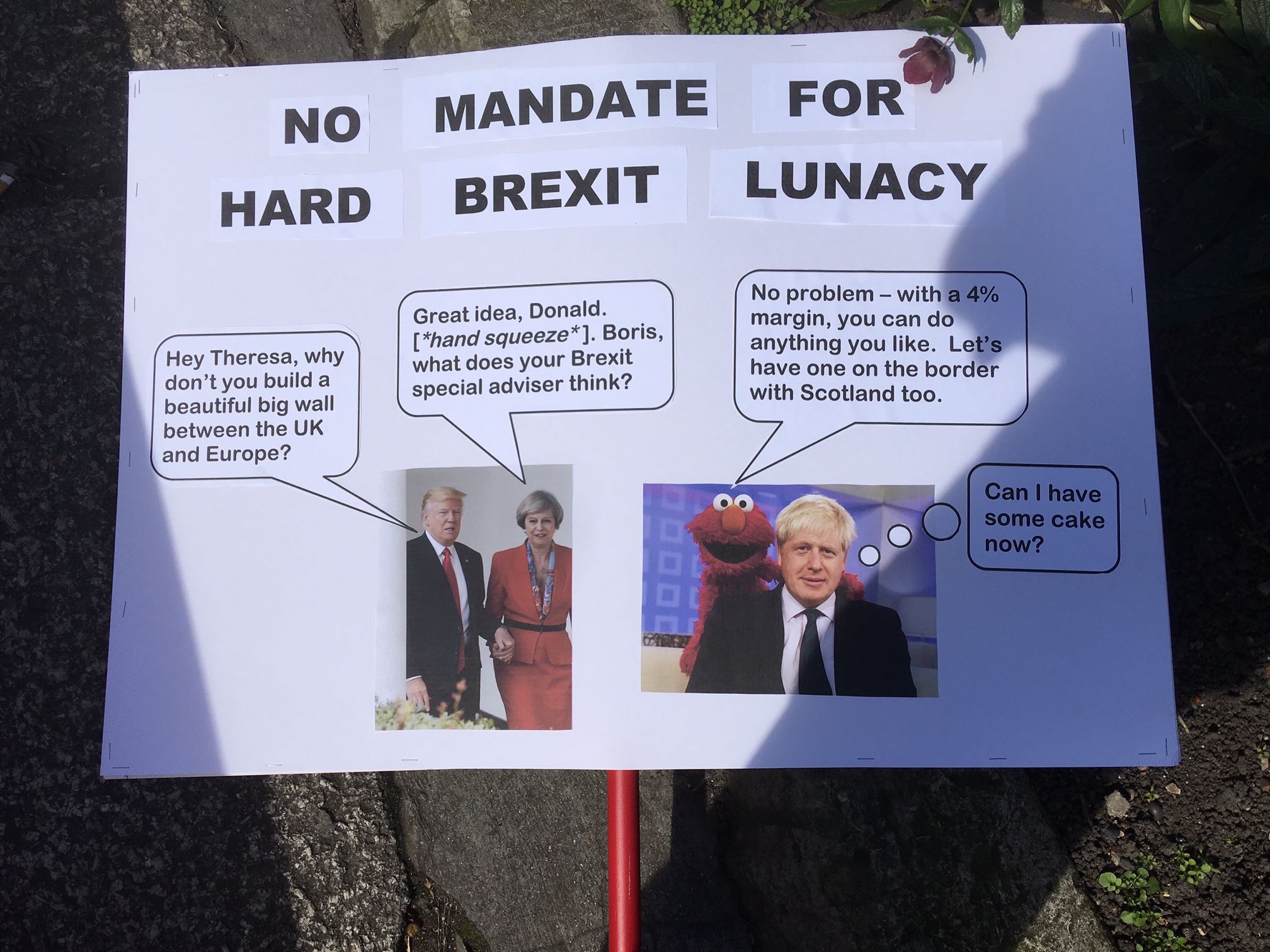 And here's the other (less amusing) side: 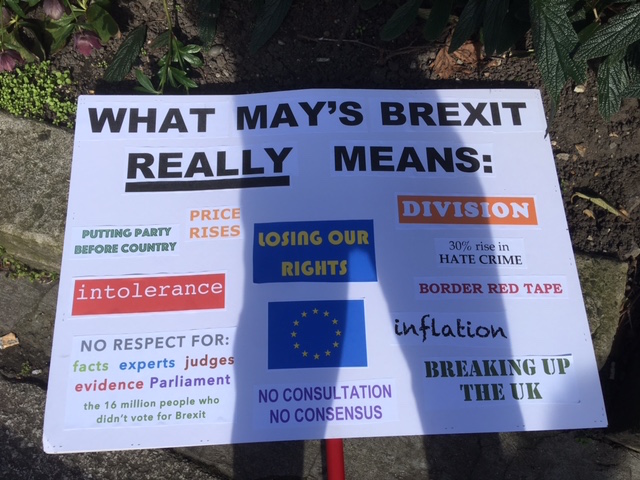 I'm not sure what the numbers were - although I've seen one estimate putting it at around 100,000.  It was certainly enough to fill fill the whole of Piccadilly and then some.  Here we are marching past the south corner of Trafalgar Square: 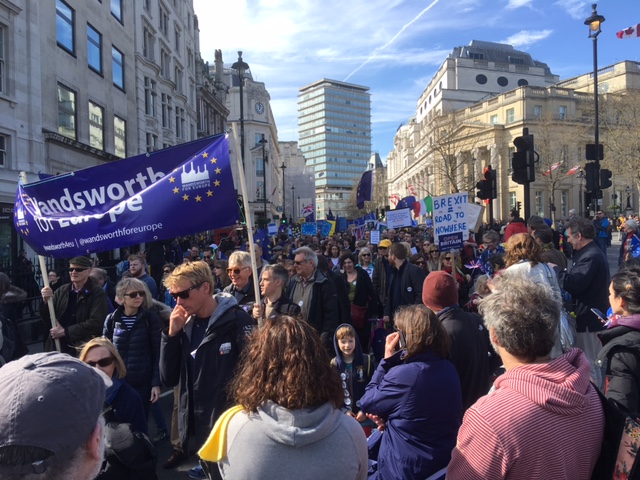 Quite a few people had brought flowers to lay at the site of the terrorist attack on Westminster Bridge.  The whole thing was pretty good humoured and (so far as I'm aware) entirely peaceful.  And here's a picture of a banana - not straight, but curved*: 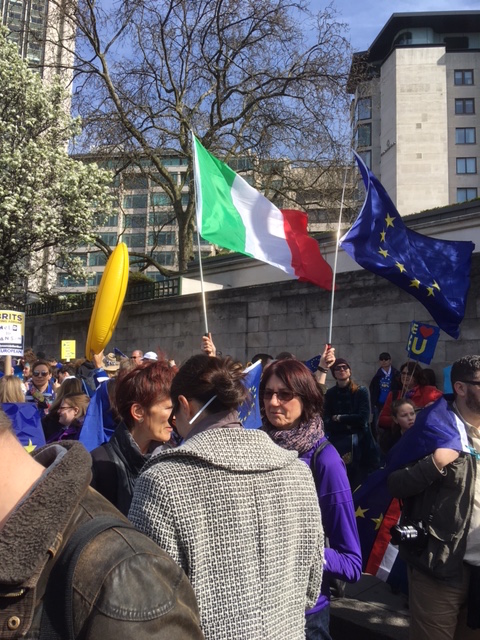 *for the benefit of non-UK readers (and possibly some UK readers as well), this is a reference to one of the most persistent "euro-myths,"  which is that the EU is so obsessed with regulation and bureaucracy that it requires bananas to be straight.  Hilarious.  But total bollocks.  There is just a law regulating how you classify bananas - so if you want to charge top dollar for them, they have to be "perfect" (which includes being "free from abnormalities of shape"), whereas class 1 bananas are allowed minor imperfections (and will cost a bit less) and class 2 bananas can have all sorts of defects of shape, so shoppers on a budget should go for them (they will still be perfectly edible).

When we leave the EU we will probably maintain similar rules about the classification of fruit and veg so that wholesalers and retailers know what quality they are buying - which demonstrates what a load of utter bollocks this is. That did not stop over very own Brexit clown in chief, Boris Johnson, mentioning it whenever he got the chance during the referendum campaign.  Other similar euro-myths are very well explained in this NPR article.

No doubt it all seemed like a bit of fun at the time - but this sort of thing has been going on for years and our own politicians never did much to contradict it, so sadly, a lot of people actually believe it.

Anyway, how do I think Brexit is going to pan out for the UK?  Well, I expect we will muddle through - but that is probably about the best we can hope for.  It's certainly true that the economy has performed better than many people (including me) expected since the vote - but as we haven't left yet, all that tells you is that consumer confidence is high.  Is that consumer confidence well-founded?  Well, I would suggest not.  The pound has already dropped significantly against other currencies, particularly the dollar:

This is bound to make imports more expensive (and we import a lot - bananas, for example, do not grow at all well in the UK).  Retailers may have had currency hedging arrangements and they may try to hold prices down - but they can't hold them down forever, so price increases are on the way sometime in the next 12-18 months.  A further round of price rises is likely if we leave the Single Market (and probably also the Customs Union), since this will increase the costs of doing business with the EU for both importers and exporters.

That said, the better than expected performance of the economy since the vote (helped by the Bank of England taking swift action to lower interest rates and calm the markets) has meant that those warning that the UK faces a difficult time after Brexit have lost credibility - even though the real test is what happens when we actually leave (because until then, nothing changes). Brexiteers have used this (and the fact that we currently have a useless opposition) to push for a much more extreme version of Brexit than anyone was really talking about during the campaign, including leaving the Single Market - although they claim that they will be able to secure the "exact same benefits" that we have now.

There is, however, no way the EU will allow us to keep all the benefits we currently have - otherwise, every other non-member country will start asking for the same thing and all the EU member states will start asking what is the benefit of being in the EU?  There is also a lot of scope for negotiations to break down over issues like the size of the UK's "divorce" payment to the EU (to settle its outstanding liabilities), Gibraltar (over which Spain has a territorial claim) and the border between Northern Ireland and the Republic of Ireland.

Yet as I say, despite these looming clouds, consumer confidence remains high - indeed expectations for life after Brexit are "sky high" according to this survey.  To my mind, these expectations are completely out of line with reality - I am reminded of that Philip K Dick quotation about reality being "that which, when you stop believing in it, won't go away".  Well, Brexit seems to be something that is being kept airborne largely by belief.  When reality strikes, there is likely to be a hard landing - and lots of people are going to be very disappointed and upset that Brexit wasn't the fantastic new dawn what they were promised, free from all that banana-straightening bureaucracy.  And that really takes us back to why a lot of people voted for Brexit in the first place - because they felt disillusioned with mainstream politicians and wanted something different.  Will they get it?  I wonder.....

Tags: brexit "pro-eu march" "unite for europe"
« Back to posts